Why Working with The Restaurant Industry is Profitable and Fulfilling

HoodGuyz is a commercial kitchen cleaning business that cleans the hard to reach areas of the kitchen, from oven hoods to exhausts and vents. We are deeply involved with the restaurant industry, as our business revolves around helping restauranteurs protect their business. Without a properly exhaust cleaned kitchen, vents, hoods, and exhausts are all vulnerable to being congested with flammable fluid. This can result in dangerous grease fires.

It is profitable to be attached to such a booming and important industry, but with the restaurant industry, it is also fulfilling. Hood Guyz works with restaurants ranging from the biggest chains in America to small local businesses. We help people protect the restaurants that they love and cherish and get to know them in the process. Hood Guyz’ service helps restauranteurs keep their businesses up to code, protecting their cherished restaurants for the future.

Franchising with Hood Guyz allows you to start in an industry that is resilient, massively profitable, and fulfilling. We are a company that helps business owners big and small protect their company from danger, and this is a service that is both highly in-demand, and also gratifying. 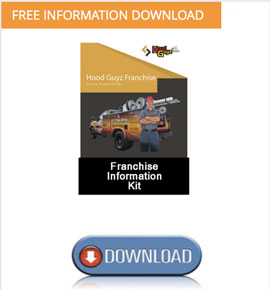 Daily food preparation in the commercial kitchen, grease, oil deposits and fumes can move from the kitchen air into the hoods resulting in the highly inflammable build-up upon the interior lining. Moreover the deposits lead to the breeding ground of bacteria and harmful contaminants.

Get Our Free Franchise Brochure